The Best Ways To Build Your Shoulder Muscles 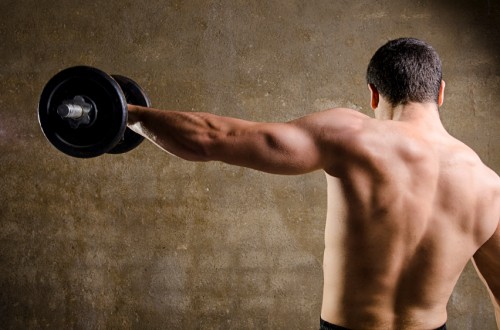 The catch, as you might have guessed, is that you should be lifting weights while you’re shrugging your shoulders. The exercise works whether you’re lifting barbells or dumbbells. Muscle & Fitness magazine calls one of its shoulder shrugging exercises the Barbell Shrug. “Standing with your feet shoulder-width apart, place a barbell in front of your thighs, hands shoulder-width apart, palms facing your body, and arms fully extended,” the magazine explains. “Keeping your arms straight, shrug your shoulders as high as you can. Pause, then lower to the start position.”

In the article, which is entitled “Get Bigger Shoulders With 5 Easy Moves,” Muscle & Fitness magazine recommends doing at least 20 shoulder shrugs three or four times during a workout. This means that you should be lifting lighter weights than you are used to exercising with. Shrugs, it says, work better with more repetitions and less weight. Done correctly the shrugs will strengthen your trapezius muscles as well as your upper back.

As mentioned earlier, you can also use dumbbells when doing shrug exercises. In “The Best Dumbbell Only Shoulder Workout,” Men’s Fitness magazine recommends three exercises. The first is the Neutral Grip Overhead Press. “Hold a dumbbell in each hand at shoulder level with palms facing each other and elbows pointing forward,” the article says. “Brace your core and press the weights straight overhead. At the top, shrug your shoulders and hold for a second.”

The article recommends doing eight shoulder shrugs five times, resting 60 seconds between each of the five reps. The other dumbbell exercises that it recommends for your shoulders are the Raise Complex and the Seated Dumbbell Clean.

The Raise Complex involves holding one dumbbell on each of your sides and raising the dumbbells to shoulder level. The Seated Dumbbell Clean involves leaning forward on a bench while you’re holding a dumbbell in each hand and your lower back is flat. “Explosively straighten your body and shrug the weights so your arms rise,” the article reports. “Allow the momentum to flip your wrists so you catch the weights at shoulder level.”

The Bodybuilding.com article “How To Build Big Shoulders, Safely” emphasizes that you should shrug your shoulders straight up and down when you’re doing exercises it names simply “Shrugs.” “Don’t roll your shoulders,” the article reports. Otherwise, the technique it recommends is similar to the recommendation for Muscle & Fitness magazine’s Barbell Shrug, but it reports that you can use dumbbells as well as barbells.

What if you don’t have access to barbells or dumbbells? The Men’s Fitness magazine article “Sculpt Broad Shoulders With Just Your Body Weight” emphasizes that exercising without weights is easier and safer, causing fewer injuries, although exercising with weights helps you strengthen your shoulder muscles faster. The specific exercises it recommends include:

This site uses Akismet to reduce spam. Learn how your comment data is processed.